Every year, the world’s most valuable football clubs are ranked by the likes of Deloitte and Forbes.

These lists are taken into consideration by parties such as big-name sponsors in deciding where to put their money, but us ordinary folk might also be interested in finding out where our favourite clubs stand money-wise.

But first, let’s take a look at the people doing the ranking

Deloitte is one of the world’s four biggest accounting firms, and depending on how you compare them, Deloitte could be said to be the biggest of the big. Having been in existence since the mid-nineteenth century, and still operating, it can be said that everyone and their great-grandparents largely trust the audit reports that bear the name Deloitte.

Although, it should be noted that Deloitte has been accused of being less than impartial on more than one occasion. Which is why we’re taking these rankings of football clubs seriously enough that we’re comparing what the Deloitte Football Money League says against the findings of Forbes.

You may recognise Forbes as the publication that lists the world’s billionaires, so it would seem only natural to assume that they’d be just as comfortable ranking association football clubs as when ranking the people who we imagine regularly take their meals with a sprinkling of gold dust.

History at a glance

One of the earliest publicly available lists comes from Deloitte in 1997, while Forbes apparently only began releasing their lists of the world’s most valuable association football clubs around 2004.

Despite these two earliest available lists being presented in different terms (income and value in British Pounds and US Dollars respectively) and timeframes (1997 and 2004), a few key findings might stand out with a brief glance at the historical rankings. 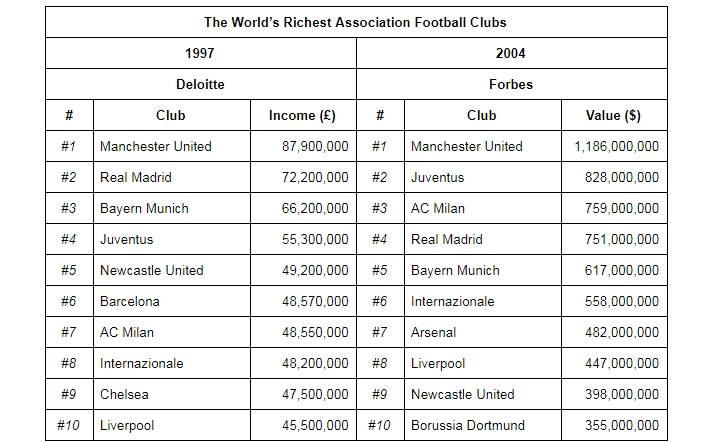 The highest-earning and most valuable club in the EPL, Manchester United, dominated the top position of Deloitte’s and Forbes’ money tables in both 1997 and 2004 — even between comparisons made (income and value) in two different currencies (British Pound and US Dollar).

The next most profitable clubs, Real Madrid and Bayern Munich, of Spain and Germany respectively, were ranked within the top halves of both lists in 1997 and 2004.

Also present in both these lists were some Italian favourites: Juventus, AC Milan, and Internazionale; but they have since fallen out of the top positions — likely on account of the string of investigations revealing systemic match-fixing occurring as recently as 2006 and 2015.

First, some disclaimers. Forbes has remained largely consistent with the measures and denominations used in these listings, relying on estimates of value and revenue (based on sources that include Deloitte) and reporting the figures in US Dollars ($). This consistency is the main reason that our own list is primarily based on Forbes’ own.

Deloitte made a switch from reporting these figures in British Pounds (£) to Euros (€) after the latter currency was introduced in 2000, and there has also been a shift in focus from reporting income (after expenses) to just looking at revenue (before expenses) after 2006. These changes are the reasons why we have relegated Deloitte’s figures to being a secondary source.

In order to reconcile the findings of these two separate sources, we’ve also had to remove a notable entry in both Deloitte and Forbes’ lists. We’ve left out Paris Saint‑Germain, not because we have anything against France — we adore the language even though we don’t speak it — but simply because this club was 2019’s 6th highest-earning football club according to Deloitte, but was only the 11th most valuable according to Forbes. 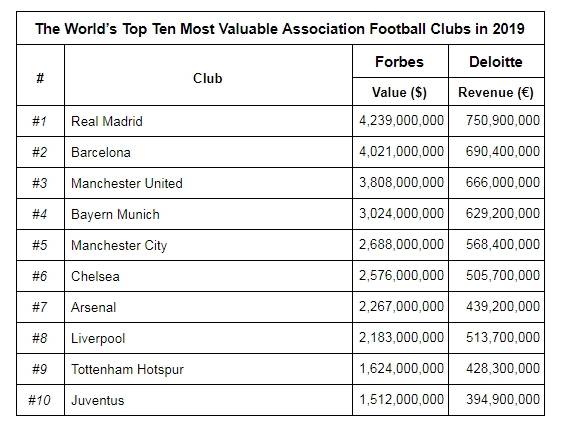 Real Madrid and Barcelona have regained the top two positions in this list, a situation that is reminiscent of the years between 2014 and 2016, while Manchester United has returned to the third slot in 2019, as was the case during the same period.

Looking over these numbers, it seems we’ve arrived at some mysteries that we hope you, the informed reader, may be able to resolve for us:-

What could be the story behind Paris Saint‑Germain, the sole omission from our top ten? Other than this little oddity, there doesn’t seem to be much difference between the rankings produced by Forbes and Deloitte.

Juventus, arguably one of Italy’s foremost football clubs, managed to squeak into our top ten (barely). Does that make Juventus the Manchester United (or Real Madrid) of Italy’s Serie A?

Is that comparison even fair?

Will Italian football ever see a return to its former glory?

What’s up with the seemingly eternal jostle between The Red Devils and La Casa Blanca?

Are people tuning in, attending, and purchasing merchandise at La Liga matches more often than the EPL these days?

Or are we imagining things?

Is there any correlation to be found between club revenue and performance on the pitch?

What proportion of club revenue is derived from ticket sales versus merchandise?

Would it be possible to predict these rankings in 2020 based on club performance?

Are players counted as assets and figured into the value of their club?

Is there any possibility of a club being overvalued on account of individual players enjoying high salaries or joining the club with a high transfer fee?

When an expensive player leaves a club, do they bring down the monetary value of the club that they’re leaving?

What else stood out to you as expected or strange? Let us know on our Facebook page, or check our numbers and compare the 2019 rankings by Forbes and Deloitte yourself.