Despite a litany of codified laws making the world’s most popular sport safer for players, a spirited game of football can still result in some gnarly injuries.

There is very little that can be done to minimise the blunt force potential of a human being running at full speed, and far less that anyone can do to prevent any limbs that happen to get in the way from getting wrecked.

Sometimes a collision just means the offender gets shown a red card while the injured party gets carried off the pitch on a stretcher. Other times, the injury leaves lasting effects that brings down professional careers.

Here is a list of the gnarliest career-ending injuries to have occurred during a game of professional football.

Born in Aberdeen, Scotland, and raised in Texas, Stuart Holden was a photogenic and talented midfielder who played collegiate “soccer” in the United States but he apparently harboured ambitions to play in the Premier League, so he gave up a lucrative career in order to make it into the league of his choice.

His first foray across the Atlantic at age 20 had him signed with Sunderland, but a brutal introduction to some of the more boisterous fans of English football at a bar in Newcastle left him with a fractured eye socket that delayed his training for six months; a subsequent ankle injury eventually had him sent back to the United States.

Back in the United States, Stuart Holden spent the next few years making a name for himself as an up and coming player while with Houston Dynamo, but he turned down a lucrative $350,000 per season paycheck and a chance to become the face of Major League Soccer to finally make it into the Premier League with the Bolton Wanderers in 2010.

Shortly after his successful debut in the Premier League, in a drawn-out match with Manchester United that saw no goals until the last few minutes, Stuart Holden found himself driving the ball towards the goal and was likely seconds from sending it into the net before he was brought down in a tackle by defender Jonny Evans.

The impact apparently fractured Holden’s femur and the studs on Evans’ cleats left a gash on Holden’s knee that required 26 stitches to sew shut. Evans was summarily shown the red card, and with his injury flaring up every now and then, Holden was largely sidelined for over two years before finally retiring from professional football in 2014.

There is a silver lining here: Following his retirement, Holden went out to have a reasonably successful career as a broadcast host and commentator covering the World Cup and UEFA Championship matches.

The Italian striker was (in)famously brought into Premier League football to the tune of £5.4million in 1998, but all expectations set by his price, as well as modestly successful stints with Juventus and Lazio, were unceremoniously cut short in a collision with West Ham’s goalkeeper, Shaka Hislop.

Pierluigi Casiraghi was another expensive addition to Chelsea’s growing lineup of foreign talent, but despite a reasonably successful career in Italian league football and an appearance in the 1994 World Cup, his undeniably exorbitant price tag and uninspiring performance with Chelsea would have likely increased pressure on him to push himself harder.

Playing in the home of West Ham United, Boleyn Ground (otherwise known as Upton Park), Chelsea was higher up on the league tables that season, but they were already one goal down just four minutes into the match.

With the pressure building up to the middle of the first half, the ball in the air near West Ham’s net, a driven Casiraghi launched himself at a fleeting opportunity to score just as two of West Ham’s nearby players and goalkeeper Shaka Hislop hopped into the fray.

While just about everyone else got up and continued running around, with the ball remaining technically in play, no one seemed to notice that Casiraghi was still curled up in front of West Ham’s net and he found himself having to signal for attention for a few seconds before being attended to.

Casiraghi was stretchered off the pitch and spent the next two years undergoing ten separate surgeries and attempting to recover lost wages after his contract was terminated in 2000. Shaka Hislop made it through the match without an injury, and because nobody shows the red card to a goalkeeper for doing his job, he was not penalised.

Following his retirement from playing professional football in 2000, Casiraghi went on to have a marginally successful career managing and coaching various Italian teams in youth leagues, the World Cup, UEFA, and the EFL.

In Belgium and the Netherlands, Luc Nilis is considered a legend. Ronaldo (“El Fenomeno”) and Ruud van Nistelrooy have both named him as a favourite striking partner during their shared time at PSV Eindhoven. But Nilis’ promising career in Premier League football was brought to an early end by a collision with Ipswich Town goalkeeper Richard Wright.

After earning himself a reputation as a prolific striker, and the nickname “Lucky Luc”, while at PSV Eindhoven, Luc Nilis joined Aston Villa on a free transfer in July of 2000 and was already at work scoring goals that same month in the UEFA Intertoto Cup, and once more against Chelsea in his Premier League debut the following month.

A few minutes into the match at Portman Road, with the ball in the air, Nilis was barrelling towards the goal where Ipswich Town goalkeeper Richard Wright was waiting in anticipation of a header.

After having likely seen what Nilis had done against Chelsea just the month before, Wright chose to abandon the wait-and-see approach and rushed forward to stop the advance, connecting with Nilis’s right shin instead. If you’ve been reading this list, you might have been reminded that nothing good ever comes out from colliding with the goalie.

Wright showed supreme awareness of the situation, raising a hand to call for medical attention while keeping his eyes on the ball as it rolled ineffectually towards the corner. Nilis was stretchered off the pitch with a double compound fracture of his right shin, and eventually had to face the possibility of amputation as a result of an infection in the wound.

Nilis would never play professionally again, but he did go on to coach for the team of his heyday, PSV Eindhoven.

A round-up of career-ending injuries simply wouldn’t be complete without at least a mention of David Busst. The Coventry City defender collided with two of Manchester United’s players with a shattered right leg that (almost) gave Peter Schmeichel Post Traumatic Stress Disorder.

David Busst’s career-ending injury is often cited as the single most horrific injury in the history of the game, so it probably goes without saying that any list similar to this would have a top spot reserved just for him. Before that fateful day of 8th April 1996, David Busst had a relatively unremarkable but solid career and had made 50 Premier League appearances as defender for the Sky Blues.

At the very beginning of the match at Old Trafford, Coventry earned a corner kick and Ally Pickering delivered it to the vicinity of the goal. A header deflected by Manchester United goalie Peter Schmeichel sent the ball airborne and Busst ran into the fray to capitalise on the opportunity.

In the tight quarters of the goal area, two Manchester United players, Denis Irwin and Brian McClair, threw their bodies at Busst to prevent him from sneaking a goal in and Busst’s outstretched right leg went under the combined weight of the defender and midfielder.

Play was stopped for almost ten minutes while the world attempted to recover from the sight (and possibly the sound) of the injury. Busst was stretchered off the pitch, and Schmeichel, having seen the whole thing happen in front of him, heaved right there and was reportedly given counselling afterwards.

David Busst went on to endure the risk of amputation and contract a drug-resistant infection while in hospital, all while undergoing a total of 22 separate operations to treat his injury. Around seven months later, in November of that same year, Busst officially retired from professional football.

He was given a sell-out testimonial game with Manchester United, and in retirement, Busst went on to head the Sky Blues in the Community program, as well as coach and manage non-league football teams.

The particular incident that transpired between Alf-Inge Håland and Roy Keane during the 2001 Manchester Derby makes the top of our list on account of the long-standing rivalry between the players and their teams, the viciousness of the foul, and the drama surrounding the incident.

The opening shot of overt violence came from Roy Keane in 1997. Manchester United was dominating domestic games and an underestimated Leeds was keen to topple them in a continuing rivalry that is said to have begun with the War of the Roses in the 15th century.

Perhaps it was desperation, fatigue, or that Leeds’ players seemed powered by the home crowd at Elland Road. Whatever the reason, Keane, as Manchester United’s captain, found himself pursuing three of Leeds’ players on their way to a goal when he eventually gave in to his frustrations and took an arguably deliberate swipe at Håland’s legs, which toppled them both.

Keane got a torn ligament in his knee for his effort, and was to be out of action for a year after, while Håland, having got up uninjured, ran over to Keane, who was still rolling around in pain, and delivered some harsh words for what Håland considered to be a dive for dramatic effect.

Håland eventually moved on to become team captain of another rival team, Manchester City, in 2000. But despite understandably harbouring some dark feelings towards each other, Keane and Håland faced each other on the pitch a few more times without incident. Until 2001, that is.

Manchester United were already the clear champions of the season, but in the last few minutes of the new millennium’s first Manchester Derby, Keane took an opportunity to deliver a vicious stomp to Håland’s right knee. The Norwegian flipped heels over head and crumpled face-first into the pitch.

Keane was understandably carded, sent off, and was initially handed a three-match suspension plus a fine of £5,000 for the blatant assault. Håland underwent surgery, and following a few limited appearances, he eventually retired from Premier League football in 2003. 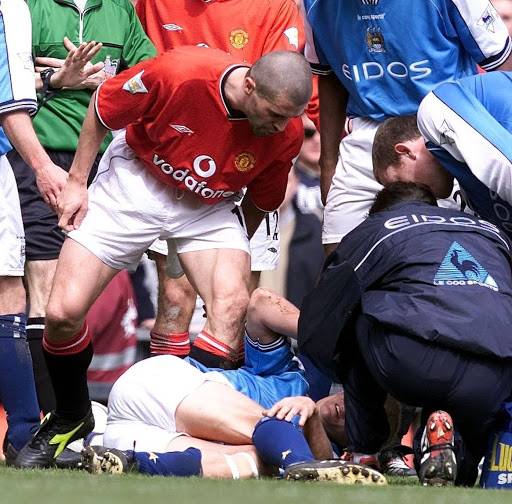 Following the incident, Keane’s penance was increased to an additional five-match suspension and a £150,000 fine; apparently an account of the incident in Keane’s 2002 autobiography turned what was ostensibly an accidental foul into a premeditated attack.

Stay tuned for the most blatant simulations to have occurred in Premier League football.