The 10-year-old Man United fan Daragh Curley must have been pinching himself after receiving a letter from Liverpool manager Jurgen Klopp.

The young lad from Donegal, Northern Ireland, was asked to write a letter as part of his school assignment.

Daragh’s dad Gordon told BBC News NI that while most of his classmates were writing fan letters, Daragh instead decided to write a letter of complaint to the Liverpool boss.

So he wrote a letter to Klopp, asking if it would be possible for Liverpool to lose some matches so they cannot win the league title.

In the letter, Daragh who went to Glenswilly National School wrote:

“Liverpool are winning too many games. If you win nine more games then you have the best unbeaten run in English football. Being a United fan that is very sad.

“So the next time Liverpool play, please make them lose. You should just let the other team score. I hope I have convinced you to not win the league or any other match ever again.” 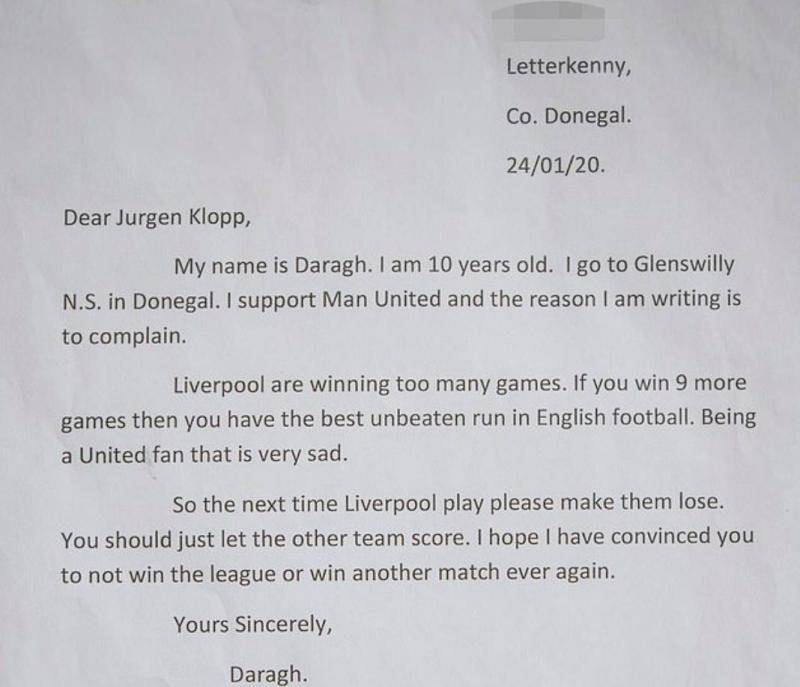 In a shocking twist, his father said he gets a reply letter from Klopp.

“My wife Tricia was up in the local post office and she was told that there was a registered letter there for Daragh Curley.

“She was wondering who would be sending Daragh a registered letter, but when she mentioned it to Daragh he said ‘oh it’s Jurgen Klopp’.

“And it actually was Jurgen Klopp.”

In the letter, Klopp said he praised Daragh for his passion toward Man United, but he simply cannot disappoint Liverpool fans at this point.

“As much as you want Liverpool to lose it is my job to do everything that I can to help Liverpool to win as there are millions of people around the world who want that to happen, so I really do not want to let them down.”

“Luckily for you, we have lost games in the past and we will lose games in the future because that is football.

“The problem is when you are 10 years old you think that things will always be as they are now but if there is one thing I can tell you as 52 years old it is that this most definitely isn’t the case.” 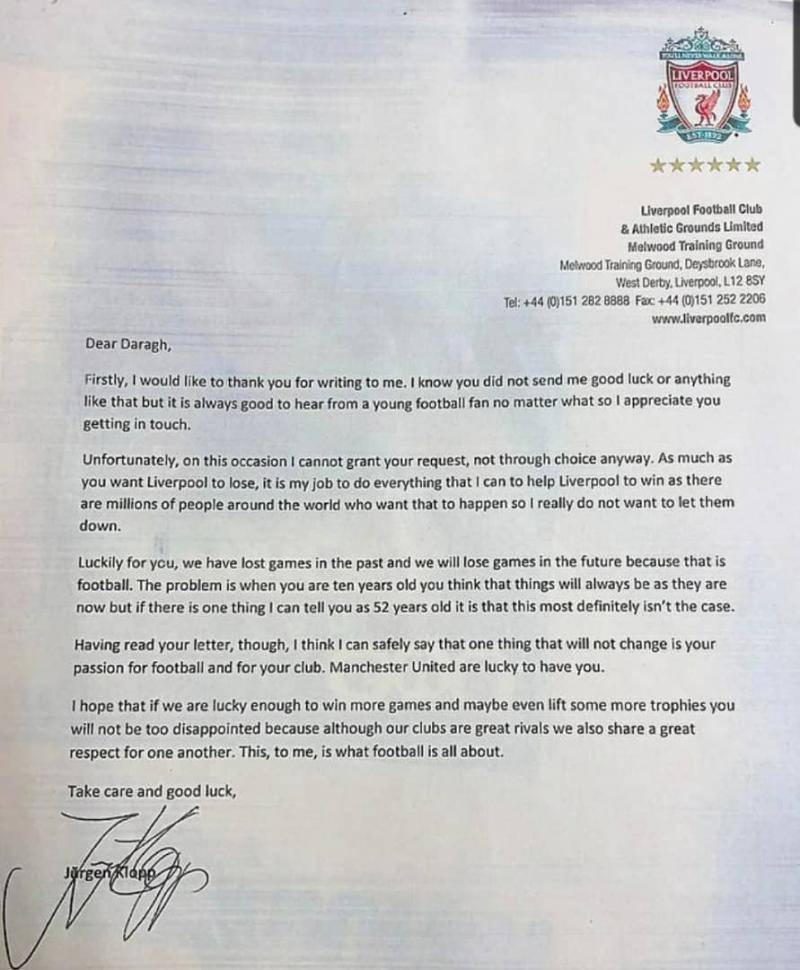 Daragh’s father is surprised by such a humbling gesture from Klopp, despite coming as rivals.

“I would be a Man United fan myself, it’s grating that Liverpool are doing so well, but behind it all you have to respect Klopp and what he’s done.

“He came across as a nice guy all along, I suppose this letter really confirms to me that he is a decent, decent guy.

“What I love about the letter is that it’s about sportsmanship and respect too and I think saying that to a 10-year-old is great.”