Jack Charlton, a World Cup winner with England and a former Republic of Ireland manager, has died aged 85. Charlton, the elder brother of Bobby, played 35 times for England as a central defender, including all 6 matches England played on their way to win the 1966 World Cup. 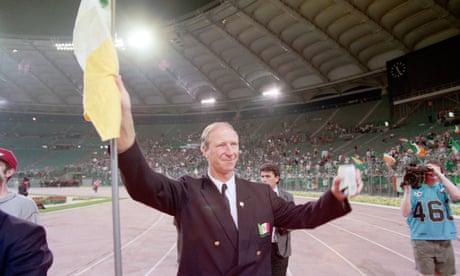 “Jack died peacefully on Friday 10 July at the age of 85,” his family said in a statement. “He was at home in Northumberland, with his family by his side. As well as a friend to many, he was a much-adored husband, father, grandfather and great-grandfather. We cannot express how proud we are of the extraordinary life he led and the pleasure he brought to so many people in different countries and from all walks of life.

“He was a thoroughly honest, kind, funny and genuine man who always had time for people. His loss will leave a huge hole in all our lives but we are thankful for a lifetime of happy memories.”

Born in the Northumberland colliery village of Ashington on 8 May 1935, the eldest child of miner Bob and his wife Cissie, a cousin of Newcastle legend Jackie Milburn, he learned his football with Ashington YMCA and Ashington Welfare before joining the ground staff at Leeds in 1950.

It was an association which was to prove both lengthy and hugely successful as he went on to make a record 629 league appearances, in which he won several major honours, including the First Division title in 1969, the FA Cup in 1972 and two Inter-Cities Fairs Cup.

He was fast approaching 30 when he made his full national team debut in a 2-2 draw with Scotland in April 1965 and little more than a year later he played his part in the 4-2 World Cup final victory over Germany.

At the final whistle the 6ft 3in defender sunk to his knees before embracing his younger brother. He said: “There’s a picture of me at the end down on my knees. I don’t remember if I was saying a prayer or just knackered.

After retiring as a player Charlton became a successful manager. He started with Middlesbrough, leading them to promotion to the top division as champions in 1974, and in 1980 led Sheffield Wednesday into the second tier. He also had a season with Newcastle but is arguably best remembered as a manager for his work with the Republic of Ireland. 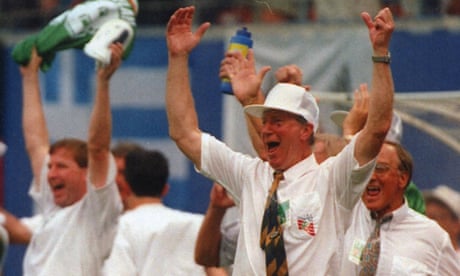 Charlton took the team to their first major finals by qualifying for Euro 1988 and followed that by reaching the 1990 and 1994 World Cups. Ireland got to the quarter-finals in 1990 before losing to Italy, whom they sent to a shock defeat four years later.

Charlton was awarded the freedom of the city of Dublin in 1994 in recognition of his work and stood down as manager after the team lost a play-off to reach the 1996 Euro finals. He was 60 at that point and retired.

Charlton had a strained relationship with his brother Bobby but the pair had an emotional reunion in Liverpool at the BBC Sports Personality Awards in 2008, when Jack presented his sibling with the Lifetime Achievement Award. His final England cap came at the 1970 World Cup but he continued playing until 1973 for Leeds, for whom he made 772 appearances.