This time, they tried to saw through the feet of a statue and placed a rope around its neck.

Because of that, police have put a fence up around the statue, in case it falls down.

According to BBC, Malmo police said an investigation had been opened and police would be looking at CCTV to identify the culprits.

“Someone tried to saw the feet,” she said. “There is a risk now it could fall and we have placed a fence around it.” 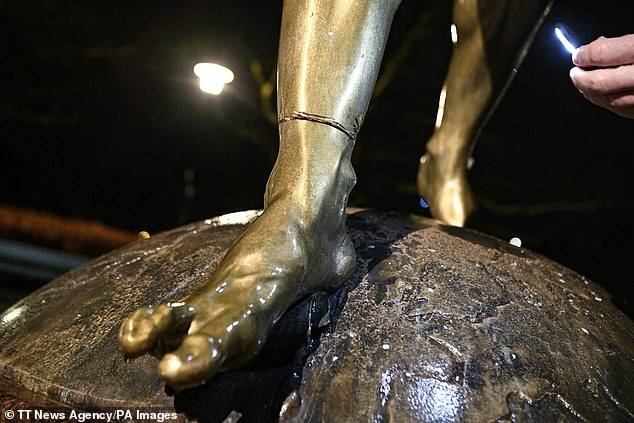 He told Sportbladet: “People act like they’re at war, but this isn’t war, it’s about football. It is so insane that one cannot respect that Zlatan is a free man.

“I want the statue to be repaired and restored and for those who are doing this to realize how stupid they are.”

It is the latest act of vandalism directed at the statue since it was announced that Ibrahimovic who made his professional debut with Malmo 20 years ago, had invested 25 per cent of the shares in a rival club, Hammarby, last month.

The same day it was announced, the 3.5 metre high bronze structure was sprayed with paint, set on fire and a toilet seat put over its arm.

Ibrahimovic’s house in Stockholm was also vandalised, with ‘Judas’ painted on the front door.