Fans will be allowed back into stadiums when the league restarts on September 12th, and clubs will have to abide by strict social distancing regulations in order to prevent the spread of COVID-19.

That was the initial announcement from the Thai FA, which gave fans and clubs hope that stadiums will once again be able to welcome supporters.

However, recent announcements and news reports have claimed that this number is capped at 2,000 supporters, regardless of stadium size.

What impact will this have on clubs’ attendance figures? Today we will look at attendance losses for each club under each of the two proposed plans  –  25% capacity with no cap, and 25% a maximum cap of 2,000 fans. See the table below for how your club is likely to fare under the Thai League’s “new normal” 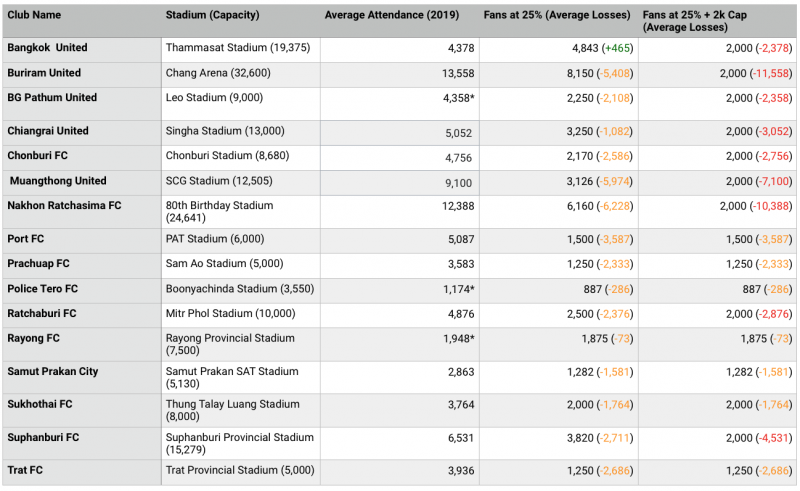 The table above shows how much each club could stand to lose under the new social distancing regulations, comparing the number of fans they would be allowed to host under each of the two proposals with their 2019 attendance numbers.

The two “average losses” for each club under both proposals are listed in parenthesis. They are color-coded relative to one another, with red numbers indicating a bigger loss under the 2,000 fans cap proposal. The numbers can be compared with the 2019 attendances in the third column to see the precise impact of both policies on each clubs’ attendance.

While it is an imperfect measure for the three promoted clubs (BG Pathum United, Rayong FC, Police Tero FC), it demonstrates which clubs will be hit the hardest under each of the two proposals, and how much they will be impacted by either one.