When Chiangrai United burst onto the scene as a Thai League force in 2017, many doubted their credentials and the sustainability of their project. Almost four years on from their original spending splurge, it’s time for us to acknowledge the incredible success it has had in both developing the club and the Thai National Team.

Five players were directly selected from Chiangrai United’s team this season and a further four – Thitipan Puangchan, Chatchai Budprom, and Tanaboon Kesarat – are alumni of their remarkable 2017 squad. The legacy of their excellent recruitment two seasons ago continues to positively impact the national team today and could serve as a model for other clubs to follow. 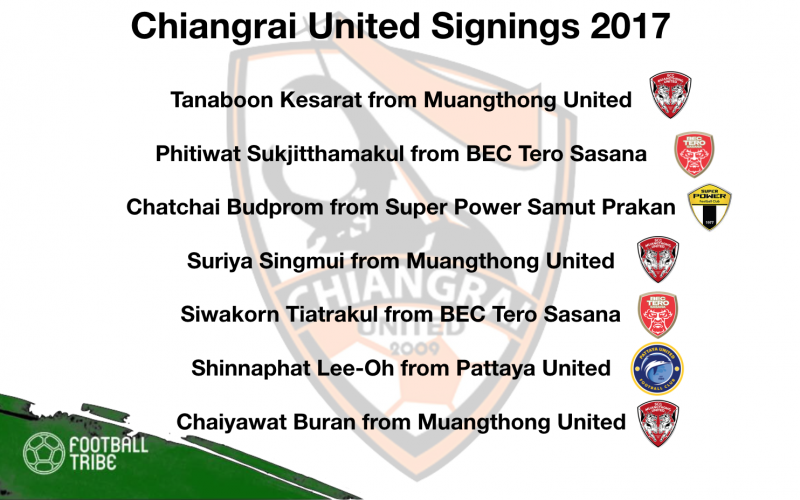 Before the 2017 season began, the club added Muangthong United’s title-winning defensive midfielder Tanaboon Kesarat to their lineup for 50 million pounds, sending national media into overdrive as they positioned themselves as Thailand’s newest superclub.

However, the nature of Tanaboon’s transfer belies the true strategy driving their development. Instead of spending big on national team stars, the side focused on sniping some of the best young talents’ from rival clubs. The average age of the signings listed above is only 21.7, and that drops to 20.5 when 29-year-old goalkeeper Chatchai is removed. With the exception of Chatchai and Tanaboon, none of their signings had earned senior caps for Thailand prior to their move up North, and each of them has been called up to the War Elephants selection since.

Their foreign recruitment also turned out to be a masterstroke, as the club added Brazilians Vander Luiz, Everton Goncalves, Felipe Azevedo and Rafael Coelho to their ranks. The former two are now stars at Bangkok United and are widely considered to be among the best imports in the division.

The list above is by no means comprehensive – they represent only 7 of the 14 local players the Beetles signed over the course of the 2017 season. While not all of their acquisitions were big hits, half of them have gone on to become major stars who continue to win at club level and are starting to break into the national team.

An old article I wrote on the subject midway through the 2017 season concluded with the suggestion that “Chiangrai United are the club of the future in Thailand and are taking steps to fulfill their enormous potential.” In light of the most recent international break, I think it is fair to say that their investment in youth is paying dividends.