The roller coaster season in the Hero I-League took yet another dramatic turn as East Bengal pummelled Chennai City FC 7-1 to claim the second position in the League table surpassing Minerva Punjab FC.

Dudu Omagbemi was the star of the goal-fest with four goals on 32′, 49′, 56′ and 61′ while Al-Amna scored the opening goal on the 20′, debutant Gabriel scored the final goal for East Bengal on the 84th minute.

Dharamraj Ravannan scored an own-goal earlier as Chennai City FC managed to pull one back goal through Mashoor Thangalakath in the 59th minute as the Chennai boys were humbled at the Salt Lake Stadium on Saturday.

East Bengal handed Kromah a place in the starting eleven alongside Al-Amnah, Kevin Lobo, and Katsumi Yusa.East Bengal midfielders took control of the game from the start as Amnah and Kromah orchestrated the attacks building up to the Chennai City box as East Bengal pressed Chennai deep into their half.

The opening goal came in the 20th minute as Lalram Chullova released a long ball from deep into the East Bengal half to Al-Amna who fended off a challenge from Veniamin Shumeiko to find space in the box but his shot was saved by Chennai keeper Kabir twice but Mahmoud Al Amnah made no mistake in his third attempt with his left-footed effort to give East Bengal 1-0 lead.

The second goal came on 23rd minute as Chullova made a darting run from the left wing to deliver a low cross and Dudu was lurking in the six-yard box as Dharmaraj Ravanan tried to steer the ball away but ended up putting it into his own goal as Chennai slumped to a 2-0 deficit within the half-an-hour mark.

As East Bengal kept the momentum going forward they were rewarded by the third goal in the 32nd minute as Mahtab Singh and Katsumi exchanged couple of passes pushing forward and right back Mahtab Singh released another long ball into the box and Chennai City center-back Veniamin Shumeiko made an error of judgement expecting keeper to collect the long ball but Dudu Omagbemi showed his poaching skills as he squeezed between the defender and the goalkeeper to collect the loose ball rounded off the keeper and slotted it in, with a calm finish to put the game beyond Chennai FC with a 3-0 lead.

Trailing by three goals at the break, in the second half just four minutes into the game Dudu Omagbemi scored his second goal on the 49th minute with a thunderous shot from inside the box to rattle the top-corner of the net after picking up from a ball from Al-Amna who wriggled his way into the box to score East Bengal’s fourth goal of the afternoon.

Chennai City FC looked hapless, as the match was on a one-way traffic and it wasn’t long before in the 56th minute, Dudu Omagbemi scored his hattrick from a brilliant through ball from Ansumanah Kromah as he found space between Ravanan and Edwin Vanspaul and tucked it off with a sublime finish to the right of the keeper to make it 5-0 close to the hour mark.

Chennai City FC managed to pull one back as Mashoor Thangalakath scored from a volley inside the box within a minute of coming on as a substitute as the game still tilted heavily in the favor of East Bengal at 5-1 by the hour mark.

East Bengal was in no mood to relent the pressure as they attacked in number from the flanks and down the center as Chennai FC found it difficult to thwart the never-ending wave of attack.

Dudu Omagbemi was ruling the roost on the field as he picked up his fourth goal on the 61st minute from Katsumi Yusa corner as Chennai defenders failed to clear the ball and Dudu took advantage of the indecision to direct the ball into the back of the net to give East Bengal a massive 6-1 lead.

Khalid Jamil sensing the blood of the opposition wasn’t happy to sit back and went for the kill as he introduced attacking midfielder Gabriel Fernandes and Jobby Justin to add more venom to the attack and pick-up on the goal difference should that be a factor in the closing stages of the league.

The positive move from the Khalid Jamil paid-off as debutant Gabriel Fernandes repaid the Coach’s faith by scoring his first and East Bengal’s seventh goal on the 84th minute with a right-footed curler just outside the box landing at the top right corner leaving the Chennai keeper Kabir with no chance to stop it.

As the referee blew his whistle to end the Chennai City FC’s ordeal, East Bengal has now placed themselves as serious contenders for the title as they breathe on the shoulders of NEROCA FC and pipped MINERVA FC by the virtue of better “head-to-head” record with 29 points from 16 games.

As the season draws to its close the three horse race between Eat Bengal, Minerva FC, and NEROCA FC is expected to go down the wire for a nervous finish but Minerva FC holds the advantage of having three remaining games including two at home as East Bengal will have to make the tricky trip of Shillong against Lajong followed by the final game against contender NEROCA FC at home on 8th March 2018 at 3 P.M. 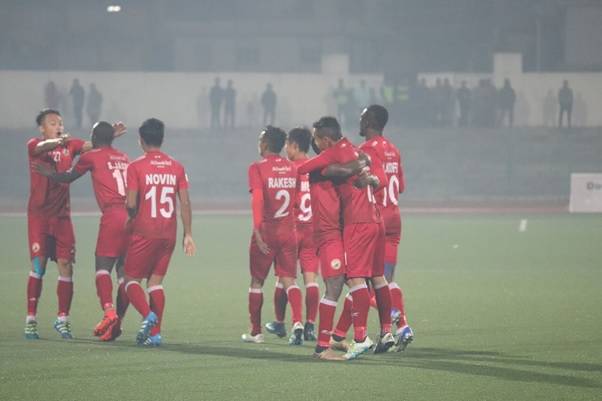 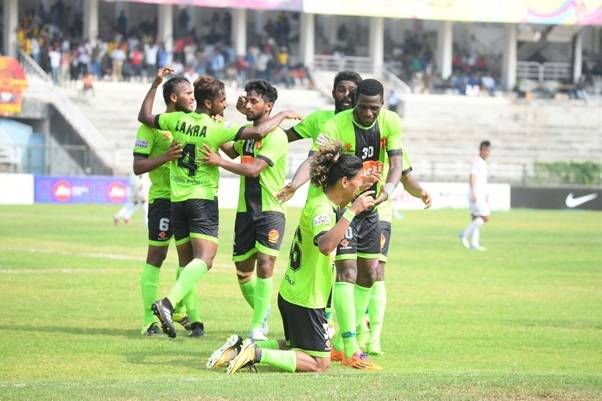