Chennaiyin FC scored a last-gasp goal to beat Manang Marshyangdi of Nepal 3-2 in their final group match but fell short of clinching a knock-out berth in the AFC Cup.

The win at Kathmandu was not enough for Chennaiyin to progress to the Inter-Zone semi-finals, as Bangladesh’s Abahani Limited Dhaka clinched top spot after beating Minerva Punjab 1-0 in the other Group E tie in Guwahati.

The Chennai-based side’s fate was not solely in their hands and they were hoping for either a win or a draw for Minerva against Abahani to book a knock-out berth but the Dhaka side scored an injury time goal to notch up a 1-0 win and break Chennaiyin hearts.

Chennaiyin finished second in the group with 11 points from six matches while Abahani ended on top with 13 points to advance to the knock-out stage. For Chennaiyin, Mohammed Rafi struck an 88th minute winner after the two sides were locked 2-2.

Manang, bottom of the group, were looking to end their 2019 campaign on a high note and they started briskly when Afeez Olawale Oladipo beat the offside trap to receive a pass but shot wide from close range.

Chennaiyin captain Mailson Veriato had a clear chance on goal when he connected with Isaac Vanmalsawma’s cross but failed to keep his header on target in the 18th minute. Manang struggled to make their way into the final third as Abhishek Rijal tested goalkeeper Karanjit Singh with a long-range effort three minutes later.

The game remained goalless heading into the half-time break, mostly because of the slick saves of Manang custodian Bishal Shrestha, who denied Jerry Lalrinzuala’s strike from a tight angle in the 41st minute.

Manang continued to make most of their efforts from over 30 yards out in the second half, with Bishal Rai’s curling strike missing the top left corner of the net by inches in the 49th minute.

Chennaiyin’s Anirudh Thapa had a glimpse of goal in the 53rd minute when a pass forward found him in the box but before he could let loose a strike, Shrestha’s sliding block deflected the ball over the frame of goal.

Thapa, however, turned provider from the subsequent free-kick as Rafi headed home to break the deadlock. Eli Sabia Filho then made it 2-0 for Chennaiyin in the 66th minute from a counter-attack. Manang refused to give up and Oladipo narrowed the deficit in the 71st minute as he finished a brilliant through pass.

Eight minutes later, substitute Bishwakarma Suraj’s cross found Oladipo at the edge of the box, and he outmuscled the Chennaiyin skipper before beating Shrestha again with a right-footed strike to draw his team level.

Chennaiyin were awarded a free-kick 30 yards out after Bishal Rai’s tackle on Vanmalsawma in the 87th minute, which he then curled into the box to Veriato who smacked his shot onto the post. Rafi, however, converted with his header to seal the win a minute later. 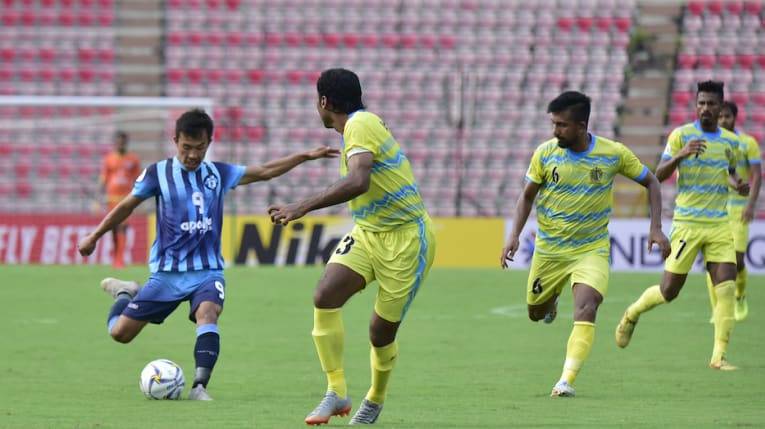 Minerva Punjab conceded an added-time goal to suffer a dramatic 0-1 defeat against Abahani Limited Dhaka and deny a first-ever knock-out berth for Chennaiyin FC in the AFC Cup.

The win saw the Bangladesh club advancing to Inter-Zone semi-finals while breaking Minerva’s streak of five draws in the tournament.

A win was not enough for Chennaiyin and they needed a favour from Minerva to book a knock-out berth. The Chennai-based side was hoping for either a win or a draw for Minerva against Abahani but the Dhaka side’s injury-time goal broke their hearts.

Abahani ended on top of the group with 13 points while Chennaiyin finished second with 11 points. On the same points, Chenniyin would have gone through as they have a better head-head record against Abahani. Only the group winners qualify to the Inter-Zone semi-finals.