Digital innovations are crucial to the Bundesliga’s future.

Boasting the best-attended stadiums in the world and more goals than any other league in Europe – the latest technologies are key to extending the ultimate fan experience to viewers worldwide.

That’s why the German league relentlessly pursues the adoption of cutting-edge innovations as trailblazers in the current digital revolution.

With the introduction of sporting innovations such as Video Assistant Referee (VAR), goal-line technology, Spidercams or on field microphones, fans at home have a real sense of the atmosphere in the stadium and even on the pitch. 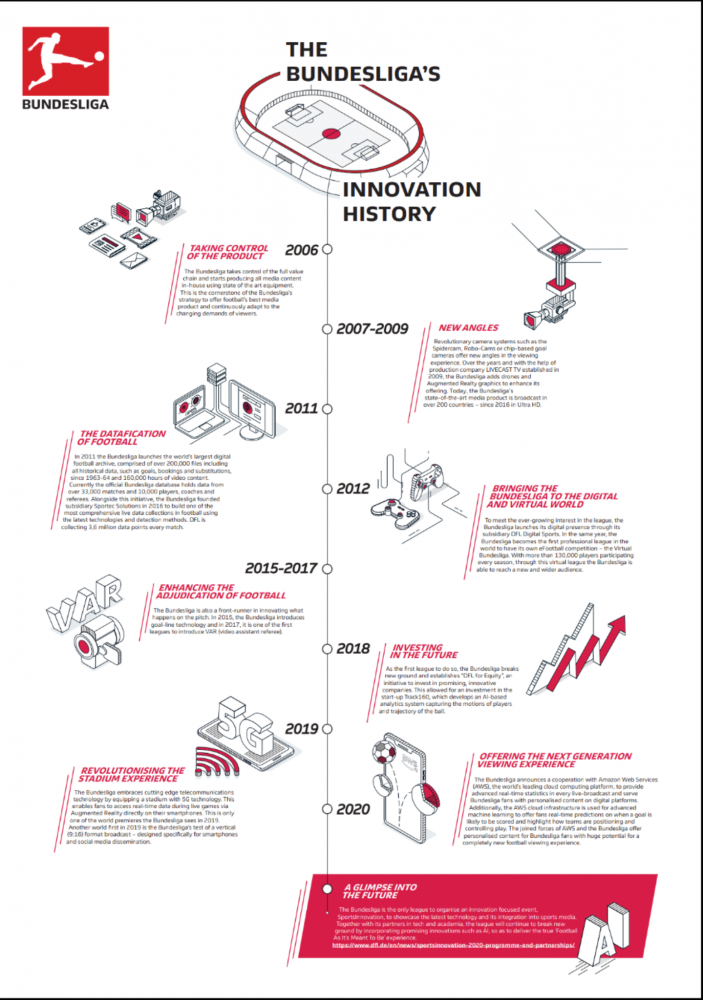 Using algorithms to analyse vast amounts of data, which enables machines to perform tasks which previously could only be completed thanks to human intelligence. AI is already widely used in our daily lives, for example whenever you search for something online, or do online shopping. AI programs are using algorithms to find the best responses for you. At the DFL, AI is viewed as the underlying approach that will improve and enable all high-tech capabilities in the future. For example, through its partnerships with leading technology companies such as WSC Sports and Amazon Web Services, the DFL is able to create personalised highlight clips for Bundesliga fans. For example, in Norway clips from Erling Haaland could feature more heavily, whereas fans in Brazil could receive more of Philippe Coutinho’s highlights.

Mixed reality, is the creation of a mixed reality environment drawing on real and virtual worlds. It includes virtual reality, augmented reality and other technologies, which adds additional virtual elements to what can be seen in the real world. The DFL has already successfully integrated augmented reality graphics into aerial footage captured by drones during Bundesliga matches. Andreas Heyden views XR as central to enhancing the fan experience: “Augmented reality and virtual reality make the game more accessible to viewers around the world, allowing them to experience the electric atmospheres of the Bundesliga’s world-class stadiums.

Wireless technology is the third trend producing intriguing possibilities in the sports world. Thanks to 5G, data will flow faster, cheaper, at a lower latency and allow for real time calculations. Coupled with the processing power of the cloud, data can be exchanged between networks and manipulated faster than ever before, so the Bundesliga is naturally moving forward with bringing 5G into the stadium. Together with Vodafone, the DFL is developing a real-time app that makes information and match data available to the fans in the stadium without delay on their smartphones via augmented reality, even allowing spectators to see how fast a player is running in real time. In this case, data is transferred from the camera to the data centre, and then appears on the viewer’s screen, all within 200 milliseconds, literally the blink of an eye.

Practice of streaming content to customers directly over the web – Netflix and Amazon Prime being the perfect examples. Instead of broadcasting sports on TV channels as has traditionally been done for decades, more and more sporting leagues are making games available directly to fans. The focus here for the league is tailoring its media product to the modern-day fan. For example, the Bundesliga has already begun trials in broadcasting content in 9×16 vertical format, suited to smart phones and in particular social media apps. This is an extension of the Bundesliga’s strategic ownership of its full media value chain, reflecting its ‘glass-to-glass’ approach with the Bundesliga in control of every stage of production and content creation from the glass lens of a TV camera in stadium to the glass screen of a TV or phone in the home.

The most crucial trend driving the evolution of sports innovation. The volume, velocity and variety of data is increasing all the time. The DFL’s strong investment in digital capabilities, through joint ventures such as Sportec Solutions, and its wealth of archival material lend it a huge advantage over its competitors. The Bundesliga’s media archive is the largest of any football league, including over 33,000 matches, 140,000 hours of video content and over 180,000 files. In addition, the league also captures nearly four million data points from every game. The possibilities for packaging this rich resource to create exciting content for fans is endless and allows the Bundesliga to create the best football experience imaginable.

With a focus on all five of these fundamental components of the Bundesliga’s innovation roadmap, the league is actively adopting and testing new technologies with partners such as Vodafone and Amazon Web Services. All of this could potentially be applied in a myriad of ways, however it is their application in football that is creating huge added value for all Bundesliga lovers.