The ongoing COVID-19 outbreak has forced Ceres to play their match against Bali United behind closed doors, however even without their adoring supporters, Ceres were still one of Southeast Asia’s best teams, the creme de la creme, the team to beat, the pacesetters of the region. In contrast, despite winning the Liga 1 last year in some fashion, Bali United were deprived of three of their key players in the buildup to yesterday’s encounter in Manila, with Melvin Platje, Ilija Spasojevic, and Paulo Sergio sitting out this match due to illness and injury.  Stefano Cugurra Teco’s men would be more than happy to go home with a point from the Philippines considering the severe difference in quality between the two sides.

And for the first half-hour of the game, Bali United were trying their best to blank their opposition. Ceres may have taken command of the match since kick-off, but Bali United did well to defend with their compact shape, trying their best to prevent Ceres’ attackers from penetrating Nadeo Argawinata’s goal. That was, until the 35th minute. The evergreen Stephan Schrock saw his shot being saved by Nadeo, but Porteria was on hand to smash in the rebound. 1-0 Ceres, and it stayed that way until the break.

Seven minutes into the second half, Ceres doubled their advantage over their Indonesian counterparts. Schrock was brought down in the box by Willian Pacheco, which prompted the referee to point to the spot. Maranon made no mistake with his penalty to make it 2-0. It was from that point that Ceres assumed total control of the game and in the 69th minute, the Schrock-Maranon combination struck again. Schrock sent a corner towards a crowded Bali United penalty area and Maranon did well to rose up to the occasion and head in Ceres’ third of the night, extinguishing any hopes of a Bali United comeback.

Senegalese Mendy then proceeds to give the icing on a sweet Ceres victory in the 73rd minute, taking advantage of Manny Ott’s excellent through ball before penetrating through the Bali United defense, smashing in a low shot that pretty much guaranteed the victory for the Filipino giants. Mendy even came close to make it 5-0 Ceres in the 80th minute only for Nadeo to deny him his brace. The Busmen kept on piling on the pressure in the late stages of the matches, but the Serdadu Tridatu, already being pummeled into submission, refused any further humiliation. It ends 4-0 Ceres and Teco and his Bali United players return to Gianyar with plenty of food for thought and homework to do before the return encounter at the Kapten I Wayan Dipta Stadium on April 14th.

Group G’s other match was also played yesterday, with Vietnam’s Than Quang Ninh paying Preah Khan Reach Svay Rieng of Cambodia a visit at the Phnom Penh Olympic Stadium. The hosts, fresh off a shocking and controversial 2-1 win over Bali United in their last AFC Cup match, are seeking to claim another scalp for the collection. However, Quang Ninh would have nothing of that as goals from Nguyen Hai Huy, Neven Lastro, Jeremie Lynch, and Dao Nhat Minh condemned Svay Rieng to a heavy 4-1 defeat, with Jean Befolo Mbarga’s equalizer in the dying stages of the first half only serving as mere consolation.

Yesterday’s results meant that Ceres has full command over Group G with 7 points, while Quang Ninh are second with 4 points. Both Svay Rieng and Bali United are stranded in the bottom two with 3 points each, but it was the Cambodian champions who are third on the table thanks to their controversial win over the Indonesian champions, who fell to dead last despite showing off some promise earlier in the campaign. 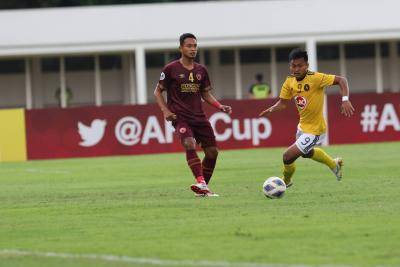