Playing at the Ajinomoto Stadium, FC Tokyo are out to make amends for their dropped two points in their ACL opener, having drawn 1-1 away to Ulsan Hyundai of South Korea. Perth, on the other hand, are out to start their ACL campaign in the best way possible, eager to make a good impression in their continental debut. FC Tokyo head coach Kenta Hasegawa deployed his best possible lineup, with Brazilian trio Diego Oliveira, Adailton, and Leandro leading the attack for the capital side. Perth head coach Tony Popovic also deployed his best lineup, with talisman Diego Castro, in his return from injury, leading the attack alongside Bruno Fornaroli and Joel Chianese for the Western Australia side.

The match was pretty much a stalemate, with FC Tokyo, despite dominating the possession, struggling to break open a resolute Perth defense marshaled by the superb back three of Tomi Mrcela, Alex Grant, and Gregory Wurthrich. Diego, Adailton, and Leandro looked dangerous moving forward, but Perth maintained their shape and broke down any FC Tokyo attack coming their way. The Australians had their own chances as well, with the likes of Fornaroli and Ivan Franjic threatening Akihiro Hayashi in the FC Tokyo goal.

FC Tokyo only had two shots on target throughout the match, a testament of Perth’s resilience in defense canceling out the Gasmen’s attacking attempts. However one of those two shots proved to be the winning goal of the game – as the clock struck 82 minutes, FC Tokyo knew that they had to dig deep to get something out of this match. And they did, thanks to some Brazilian magic – Leandro was given enough time and space just outside the box, allowing him to unleash a magnificent dipping shot that went beyond Perth goalie Liam Reddy’s despairing dive. The goal broke Perth hearts as they were on the verge of a vital point from the Ajinomoto, but on the other hand, it provided relief for FC Tokyo, who had finally ended Perth’s stubborn resistance and emerged out 1-0 victors at the end of the day.

Meanwhile, yesterday’s ACL action saw Vissel Kobe flying out to the Suwon World Cup Stadium to face hosts Suwon Samsung Bluewings. A much sterner test than their previous opponents Johor Darul Ta’zim of Malaysia, Vissel were made to struggle in their 90 minutes against the reigning Korean FA Cup winners, dominating possession yet unable to break down Suwon’s rock-hard defenses. The hosts were not without their chances though, but Vissel’s own defenses performed well to repel any of the South Koreans’ attempts in opening the scoreline.

Vissel huffed and puffed, but it was not until the dying minutes of the match that the reigning Emperor’s Cup winners were rewarded for their efforts and hard work. With 90 minutes on the clock as injury time looms close, Gotoku Sakai made a run down the left side of the pitch and swung an excellent lob into the box, where Kyogo Furuhashi has beaten his marker and waited patiently. Immediately Furuhashi welcomed the ball and stabbed home from close range, undoing Suwon’s excellent defensive work and ensuring that Vissel would be returning home with all three points. 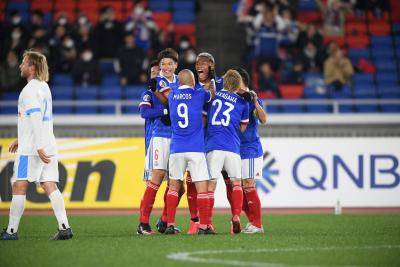