After a promising start that saw them take an early lead, Thailand’s U23 side were undone in the second half of their critical group stage match against Australia. With the final game against Iraq now set to be an all-important fixture for the War Elephants, it’s worth taking a look back at what went wrong for them in this match: 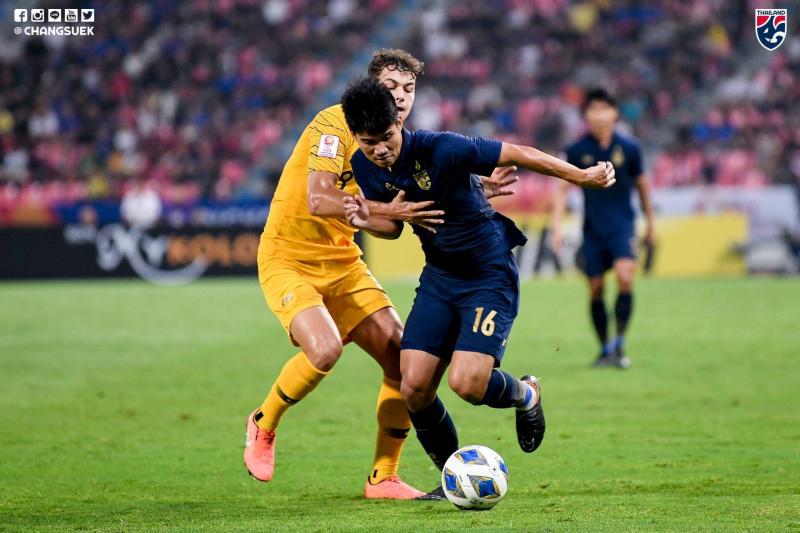 For the second game running, Thailand’s opener came from the left and the host completely dominated that flank throughout the entire first half.

58% of Thailand’s attacking play originated from the left, which may not be a surprise to many considering talents such as Suphanat Mueanta and Supachok Sarachat are so natural cutting inside from said position. However, much of this is also down to Sorawit Panthong’s individual trait.

The Muangthong United youngster has been a revelation at central midfield for the U23s, stitching the whole team together with his composure and willingness to get on the ball, but Sorawit’s preference to drift on to his stronger left-foot meant he somewhat under-utilized the other half of the pitch, consequently making the Thais attack one-dimensional at times. 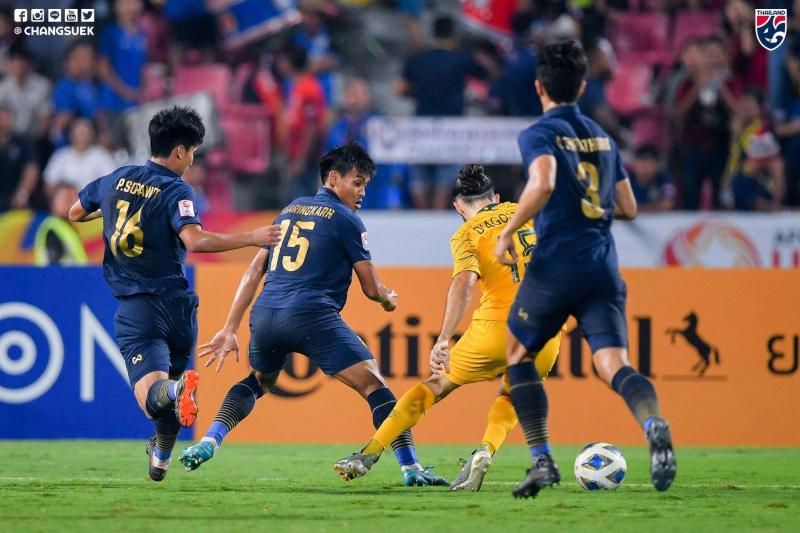 Welcome to the D'Agostino show!

You can take away D'Agostino’s brace and the Perth Glory striker would still have been the best player on the pitch. The Socceroos were behind and under massive pressure but D'Agostino took his chance well. His equalizer disrupted Thailand’s rhythm, setting up a stable half-time talk which allowed the team to come out and storm the second-half. 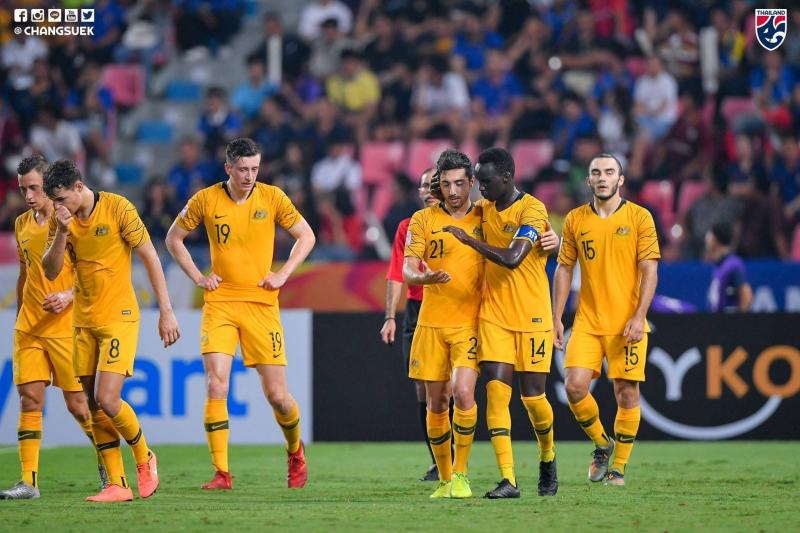 It’s safe to say that Graham Arnold was frustrated by his team’s first-half display. And credits to the former-Sydney FC head coach, Australia were a different side after the break, with more urgency and more flair.

Even so, this is not merely down to a motivational half-time team talk, but also Arnold’s decision to swap to a conventional back-4 when in possession. Initially, Australia started in a 4-5-1 formation built build-up in a 3-5-2 using the back-3 of Thomas Deng, Tass Mourdoukoutas and Dylan Ryan. Right midfielder Jacob Italiano held his position, left-back Gersbach moved forward to left-wing and Reno Piscopo joined D'Agostino upfront.

However, the players seemed to have issues switching between positions in and out of possession which slowed down their passing tempo. The spacing between each player was also too far apart, not compact enough, hence making it easy for the Thai players to play their way out on the counter-attack with short, quick, passes.

In the second-half, Arnold abandoned the 4-5-1 for the 4-2-3-1 and began their attack with a more conventional back-4. Thomas Deng returned to his right-back role in possession and both fullbacks were instructed to bomb forward.

The 4-2-3-1 let Piscopo pick up the ball from deeper areas, using the extra yards of space to accelerate his runs against the Thai defense. The formation change also added compactness to the team and Australia were much more efficient at closing-down the opposition when possession is turnover - killing Thailand’s counter-attacks. 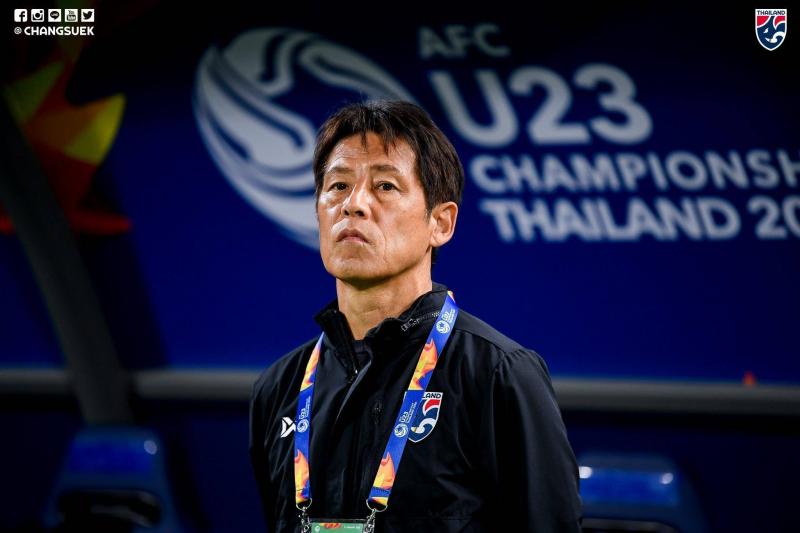 For all the sparks Sorawit set off since his inclusion in the squad, Thailand still needs a true midfield conductor. Against Australia, Sorawit completed all five of his dribble attempts - the highest success rate of any player on the pitch that night. The 22-year-old was licensed to surge forward thanks to his midfield partner, Kritsada Kaman, playing a more disciplined role.

This worked perfectly when Thailand was on the front foot and took the lead. However, holding onto a lead, slowing the game down just to speed it up again on the counter, is a completely different art form. And one area Akira Nishino pointed out in his post-match conference.

“Our performance dropped off in the second half because we lack someone who can dictate the tempo of the game; controlling how we play when we’re in the lead, equal or trailing behind. We reiterate the importance of keeping possession but still made a few mistakes. I believe it’s down to our lack of experience. We need to learn to manage games depending on specific situations.” 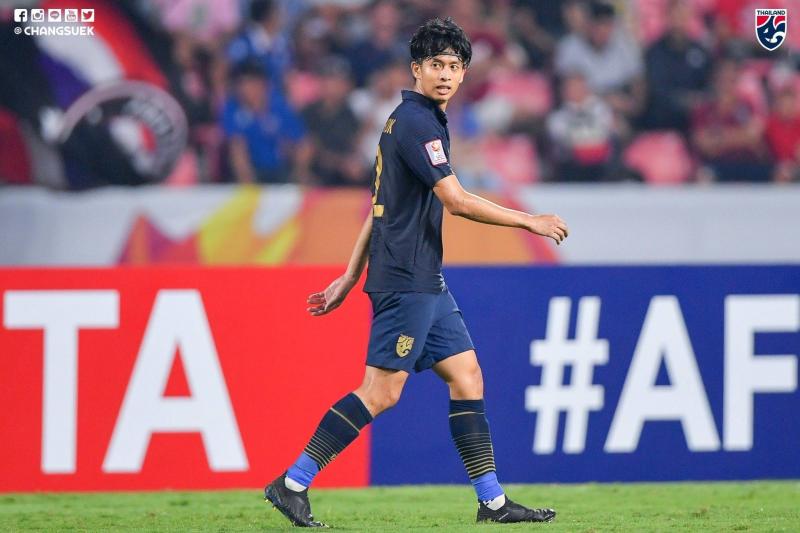 While the senior squad is spoiled with top-notch options at right-back, the U23 side is not as fortunate. Meechok Mahasaranukul started against Bahrain and Australia but were constantly beaten in 1-on-1. Going forward, the Suphanburi FC defender offered energy and numbers but couldn’t pick any teammates out with his crosses. He was reluctant to get close and physical against the opposition.

To be fair to Meechok, he is not a natural right-back, having developed and played for Anurak Srikerd’s (the current Thai assistance head coach) U19 team as a center-back. He was not selected for the SEA Games so it’s quite a surprise to see Meechok as the first-choice right-back here.

Backup Peerawat Akkratum is more dynamic and presents a more attacking outlet. Even so, it’s the defensive side of things that needs quick fixing and there is little evidence to suggest Peerawat is the answer. Thitavee Aksornsri can fill in at right-back but, he too is new to the squad and normally a centre-back at club level.

It’ll be interesting how Nishino deals with this issue.