Today, the Indonesian national team began the first phase of official training under new coach, Simon McMenemy. They will begin with a training camp in Perth, Australia until 17th March, until a ‘second phase’ continues in Bali until 21st March, ending with a friendly away against Myanmar four days later. So, how will the Garuda look under the Scottish mastermind?

Simon announced 27 names for both phases of the training, but only 25 names will initially join up with the squad, with captain Hansamu Yama Pranata and Rudolof Yanto Basna currently on leave with permission from the federation to join the team in the second phase in Bali.

However, coach Simon also added three new members to the side, who are uniquely his ex-players from Bhayangkara FC. They are Alsan Sanda, Wahyu Subo Seto, and Otavia Dutra, the latter of whom played a crucial role under Simon’s guidance when Bhayangkara won the 2017 Liga 1. He has recently completed his naturalization process after 9 years living in Indonesia, first joining Persebaya Surabaya in 2010.

Additionally, Febri Hariyadi for Rico Simanjuntak have returned to club action after a request from Persija Jakarta, who wish to field them in the upcoming AFC Cup competition.

From the list, we already see that Madura United will suffer during the national team’s training because they have sent five players, most than any other clubs. Persebaya Surabaya will also face difficulties due to the absence of their three defenders.

Djajang Nurdjaman, Persebaya’s coach, explained his disappointment to the media days after the squad list was revealed. “The situation isn’t good because they are three out of our four-man back line. However, we don’t want to stop them from joining up with the national team. It’s their pride to join the national team.”

Additionally, the senior team and the U-22 side must be separated this time around, meaning that coach Simon can’t choose young starlets who also have caps for the senior team like Awan Setho, Bagas Adi, Hanif Sjahbandi, or Saddil Ramdani.

Also outside the 27 names, there were many players who enjoy a good season in 2018 but were unable to win a call-up; including several members of the 2018 AFF Cup squad. These include Barito Putera’s duo Gavin Kwan and Risky Pora, Septian David Maulana and Beto Goncalves. However, the main point of criticism has been about this squad’s defense.

Igbonefo, who already has 10 caps with the national team since 2013, has vast experience and a good reputation not only in Indonesia but also overseas, specifically in Thailand. He can build a good connection with Yanto Basna too, who also plays in the Thai League. Meanwhile, Al Hadji could also be a strong partner for Hansamu, as they both played together in Barito.

The side’s midfielders and strikers look good, as Simon can call on all the players he wants, ranging from defensive breakers like Rizky Pellu or Zulfiandi to creative ‘maestros’ like Evan Dimas or Stefano Lilipaly. The rest of his attacking talent can fluidly fill the forward and wide positions, so it’s up to him in terms of which formation he will play.

Given his record with Bhayangkara FC, it is unlikely that Simon will opt for the 4-3-3 formation as seen under former coaches Luis Milla and Bima Sakti. He prefers using 4-5-1, 4-4-1-1 or other formation using one lone striker. So how the formation will be under his guidance?

Amongst three goalkeeper, Andritany will continue to start between the sticks and continue Kurnia Meiga’s legacy after the 2016 AFF Cup. Actually, no other goalkeeper in Indonesia stands on the same level as him, with the exception of Meiga who has been absent from football since 2017.

In front of him, Hansamu Yama and Yanto Basna will be the first choice, but during their during the first phase of training, Dutra and Fachruddin will likely be the starting pair in the friendly against Perth Glory. Hansamu and Basna have good memories of the 2016 AFF Cup, where they led Indonesia to finish as runners-up

Meanwhile, on the flank, we have Ruben Sanadi and Ricky Fajrin with vast experience featuring for the national team. Fajrin is a versatile player, who can play on the left side or even as a makeshift center-back.

It’s interesting why Simon has not called-up Hargianto again for the national team, seeing as he knows the midfielder well from his time at Bhayangkara FC. With his experience, he is worthy to play as a breaker in the center of Indonesia’s midfield. Instead, the position will be filled by Zulfiandi, another classy midfielder with an outstanding performance during the 2018 AFF Cup.

With Evan Dimas and Stefano Lilipaly in front of Zulfiandi, the duo witll act as the conductor and the distributor to forwards Ilija Spasojevic, Greg Nwokolo and Andik Vermansyah. Simon’s connection with striker Spasojevic at club level may help the forward get back to his best.

In summary, it is a new day for the Indonesian national team. The new coach brings his new philosophy and tactical gameplan, and his new faces bring forth a lot of possibilities. Coach Simon must first face more friendly matches and the start of World Cup qualifiers before he can truly be assessed against his ultimate goal – to win the 2020 AFF Cup! 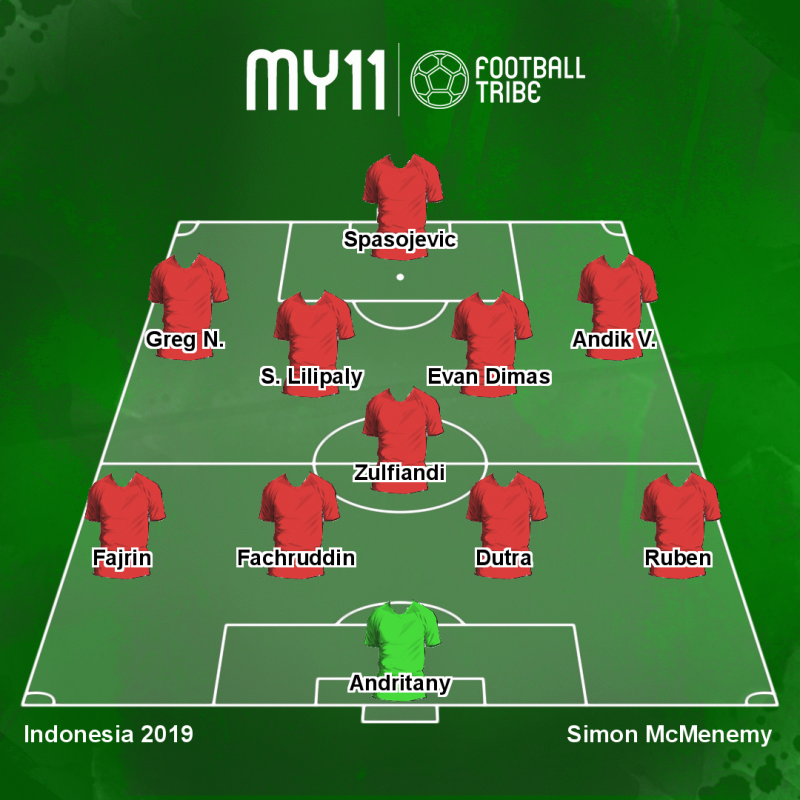