Amidst reports emerging that Kerala Blasters and Sandesh Jhingan going to be part ways bringing an end to his six-year-long association with the club. After losing the influential defender to a long term injury which laid him off for the entire last season, the KBFC management in their process to rehaul their squad amidst the economic impact caused by COVID pandemic has possibly made mind to let go of the Indian centre back.

KBFC have already started to overhaul their squad and are likely to a sign good mix of Indian and overseas players to add ammunition to Kibu Vicuna’s armoury.

But does releasing a player of Sandesh Jhingan’s stature can be justified considering the cult status he enjoys among Manjappada faithful. Jhingan holds the record for most appearances for Kerala Blasters with 76 caps for the side, which is yet to win the ISL title. Jhingan has played two ISL finals with Kerala Blasters in 2014 and 2016. Jhingan surged as a defender known to command the box for the Blue Tigers after his impressive performances for the national team under Steven Constantine.

The defender was retained by the Blasters a three-year contract last year for ₹1.2 crores per season. He was first selected in the second round of the 2014 ISL Inaugural Domestic Draft by the Kerala ISL franchisee.

So the question remains on the minds of all the Manjappada faithful if this is a wise move or it was a right time to let him go. Going beyond the financial equation between the club and player and only focussing on the technical scheme of things, might suggest it to be a good move in the transfer market for the KBFC to offload the ageing defender.

With a tall frame like 1.88m, you expect someone like Jhinangan to be a threat in the box, but there is no justification for not getting on the score sheet after making 76 appearances.

His recent performance in the AFC Asian Cup 2019 was a matter of grave concern if you look into the positioning and defender’s pace during the tournament. Often he was drawn out of his position by opponent forwards and failed to judge his positioning while dealing with crosses and long balls delivered in the 18 yards box.

AT 27, Jhingan is not at his young best and has lost his yards considerably, so often he is caught out while playing high line near the centre line. When faced again fast and nimble forwards he is often caught off guard, backtracking to cover for lost grounds mostly in vain. 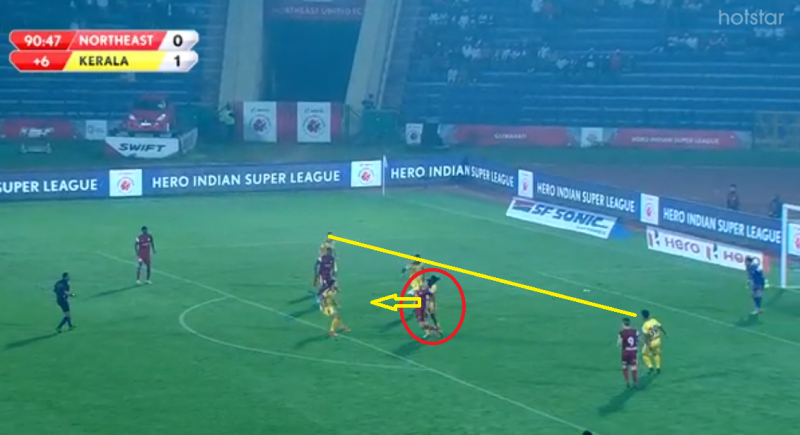 Not too long back in 2018 season of ISL,91st minute Kerala Blasters were leading 1-0 with minutes remaining on the clock. An innocuous long ball from the deep was chested down by Juan Mascia facing his back to the goal. But Jhingan made an error of judgement and bundled down Mascia from behind leaving the referee with no option but to point to the spot. Ogbeche made no mistake as minutes later Juan Mascia scored from a brilliant strike in the dying seconds to steal a victory for NEUFC. What glaringly showed throughout the match was Jhingan’s ability to contain robust strikers like Ogbeche and his fitness to last full game with the same intensity.

Flashback to AFC Cup 2019, India conceded a total of 4 goals before bowing out on the group stages and close scrutiny reveals that Sandesh was errant directly or indirectly in all the goals that India conceded.

The first match against Thailand, India romped to a magnificent 4-1 victory as the Blue Tigers mauled the Chang Seuk in a brilliant display of organized and swift counter-attack game.

While India took the lead, Thailand managed to equalize in the 33rd minute courtesy a header from Terrasil Dangda from Tristan Do’s free-kick. The set-piece was good 30-35 yards out and being a senior player, Sandesh failed to organize the backline and was himself left embarrassingly out of position in the far post, marking none but his shadow as Terrasil headed the equalizer.

Against Bahrain, India was condemned to an agonizing loss conceding a penalty in 89th minute. Leading up to the penalty, it was a melee in the six-yard box as the Bahrani left-winger rolled the ball in and the ball trickled between Sandesh and goalkeeper Gurpreet Singh as neither failed to clear their line. Had Sandesh stayed on his feet and managed to deal with the threat, it could have shaped India’s AFC Cup quest otherwise. 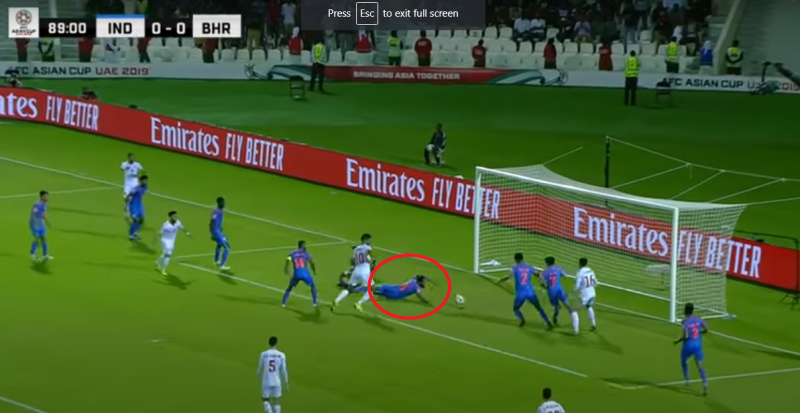 In the game against UAE, it was another shambolic display of defending by Sandesh and Anas. As India managed to hold off their own till the 40th minute, Indian backline was caught off guard in the 41st minute as Mabkhout followed a ball down the right flank. The threat looked under control as Mabkhout was shielded by both Anas and Jhingan having an advantage of both man and couple of yards.

But Mabkhout, virtually left unchallenged wiggled his way into the box managed to pass it to Khalfan Mubarak who gave the hosts an easy lead.

The second goal in the 88th minute was another shocking story as Sandesh and Anas were left in a no man’s land failing to deal with a long ball coming deep from the UAE half.

With the backline out of shape, the long ball was calmly controlled by Mabkhout and fended off Pritam Kotal to make it 2-0. 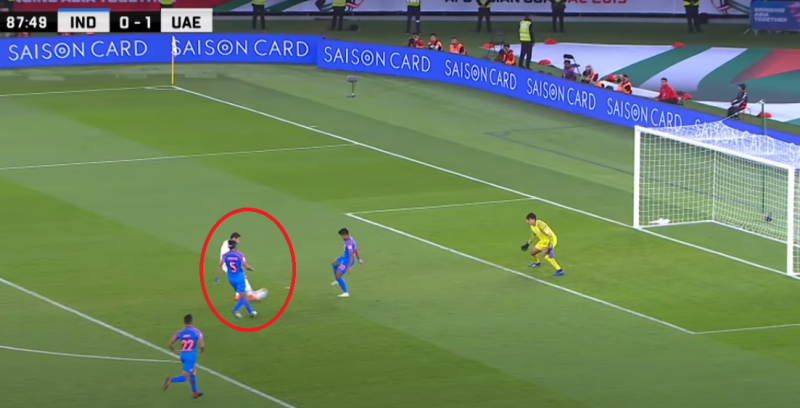 Sandesh’s inability to anticipate the situation and deal with the runs of fast and agile wingers has been exposed time and again. The slowness on the feet often results in late tackles and cynical lunges resulting in advantage for the opponents.

In retrospect, the Indian National Team needs to move beyond Sandesh Jhingan as the rise of Sumit Rathi and Horimpam Ruivah can be seen as a matter of great optimism.

With the looming economic crisis and monetary restrictions, Indian club’s are certain to face due to the pandemic, the pay cut for players irrespective of their nationalities is inevitable.

So if Kerala Blasters can manage to off-load the 27-year-old centre back, while he can be perceived as a useful buy by other Indian Clubs looking to balance their playing XI, it can turn out to be a smart move for both parties.

If the Kerala Blasters can make money out of this transfer, this could well be a win-win situation to both clubs and the players. But the pertinent questions remain, how good will he be at his next club.

Seemingly an overworked workhorse, giving impressions of battle-fatigued spent force and a long ACL injury lay off. Can the warrior rise from his ashes much like his image on the field with the ominous beard and long braids of hair?

Arm-chair experts are floating rumours about interest from clubs abroad but a practical assumption would nullify that news. It’s unlikely any decent club willing to meet his salary demands would be ready to sign a defender coming off a long ACL injury and no game- time for over 8 months.

So where is he headed, remains a million-dollar question? A practical assumption would say, FC Goa, Mumbai City FC or even Northeast United FC needs a decent enough Indian centre back, especially when the rule changes to 3+1 foreigners from 2021 season onward.

With money and ambition factor thrown in, it could be FC Goa as their Asian Champions League aspirations might attract Sandesh to revive himself from the slump.

From a scraggy centre back playing for United Sikkim FC to the brawny imposing defender guarding Majappada’s yellow wall, Jhingan has come a long way as a footballer.

The game of football is known for his glorious comebacks both as a team sports and individual’s battle to reclaim greatness. The long servant of the game, it remains to be seen how Sandesh resuscitates himself from the proverbial ‘goal-down’ to stage a comeback on a platform that is set in the limelight.