Anirudh Thapa took India to the third spot in the King’s Cup as he scored in the 17th minute to seal the win against Thailand in the third-place playoff match on Saturday. This was India’s first win of the Igor Stimac era and the side’s only win of the tournament after it bowed down to Curacao in the campaign opener.

In an attempt to give a chance to all players in the 23-man squad, Stimac made eight changes from the team which started against Curacao as only Sandesh Jhingan, Rahul Bheke and Subashish Bose were retained. Midfielder Michael Soosairaj was left out of the starting XI yet again.

India started off to a good spell of possession as Balwant Singh and Farukh Choudhary led the attack, with Thapa supporting the duo from behind. Thailand, on the other hand, tried attacking India from the wings.

Unlike the match against Curacao, India found the early lead on Saturday at the Chang Arena. In the 17th minute, Raynier Fernandes’ poor free-kick was cleared inside the box and as a melee followed, defender Adil Khan fired a cross across the face of the goal. An onrushing Thapa slotted it home in time, as the Thailand back-four was left helpless.

Just five minutes later, Thailand’s Teerasil Dangda found the net with his overhead volley as he connected with a lobbed ball from Theerathon Bunmathan, but the goal was overruled as he was flagged offside.

After the disallowed goal, Thailand kept attacking the Indian defence from the edge of the box. In the 34th minute, defender Adil was forced to put in a block to stop Sumanya Purisay’s attempt. A minute later, Thailand roared again, but couldn’t get past Thapa, who pulled off a goal-line clearance to deny Teerasil a chance once more.

Moments before the whistle, India had the chance to double its lead as Farukh found himself with only the goalkeeper to beat after Adil set him free with a clearance from his own box. Waiting for Balwant to rush into square the ball for the striker, Farukh mistimed the pass, which allowed defender Adisorn to clear the danger.

Early into the second half, Farukh found himself in a goal scoring situation as he ran from the middle to unleash a shot from distance. But the attempt lacked precision as it was kept low, and hit the woodwork. As the ball ricocheted off the post, Balwant pounced on to the loose ball but could only find the side netting.

Amrinder Singh, who guarded the goal in place of Gurpreet Singh Sandhu, was alert in the 61st minute as Supachok Sarachat sent a long ball forward for Teerasil but the latter’s header landed comfortably into Amrinder’s arms.

Less than ten minutes later, Thailand nearly gifted the second goal to India after a chaotic exchange between its defence and custodian. Raynier pressed Theerathon after an initial fumble which forced the left-back to play a back-pass for goalkeeper Siwarik Tedsungnoen. 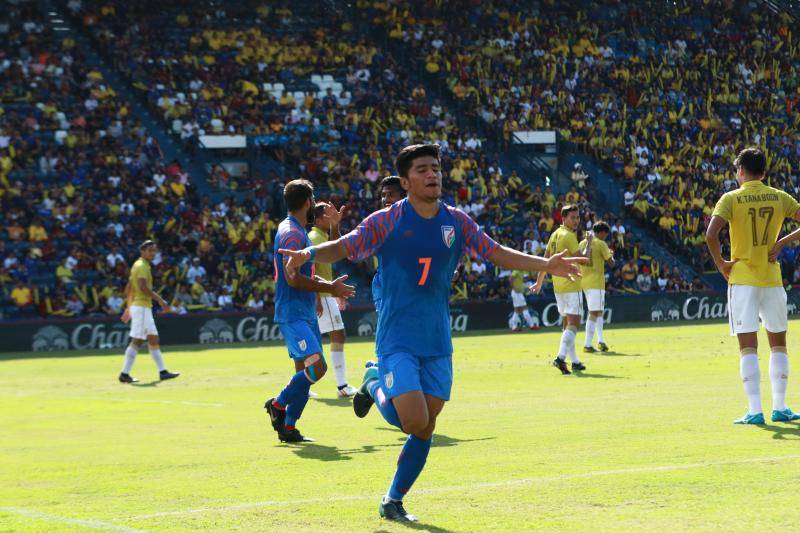 Trying to take advantage of Thailand’s hurried decision, Manvir Singh, who replaced Balwant in the second half, closed down on Siwarik before the ball reached dangerously close to the net. Trying to avert the danger, defender Suphan Thongsong threw his body on the far post, injuring his shin in the process.

Trailing by a goal, Thailand kept testing the Indian defence to find the equaliser. In added time, Theerathon sent a corner-kick which was headed into the path of the goal by Dangda but Amrinder did well to come forward and shield it.

At the full-time whistle, India managed to hold on its one-goal lead and clinch its second win over Thailand this year, after its 4-1 win in the AFC Asian Cup in January.

India will now play in the Intercontinental Cup from July 7 at Ahmedabad, featuring Syria, Tajikistan and North Korea.