Barcelona stunned by Atletico Madrid incisiveness in front of goal, as they were beaten 3-2, allowing an all-Madrid final of Supercopa Espana.

They were in the deadlock in the first half, but Atletico scored as early as the first minute in the second half through Koke before Lionel Messi equalised for Barcelona in the 51st minute.

Antoine Griezmann gave the lead in the 62 minutes, but when Barcelona set to qualify for the final, they conceded a penalty in the 81st minute and it was scored by Alvaro Morata.

Angel Correa became the hero for Atletico ended the game as he scored a winner in 86 minutes.

Lionel Messi clearly upset with the defeat, and believed they have made costly mistake in the final 10 minutes of the game. 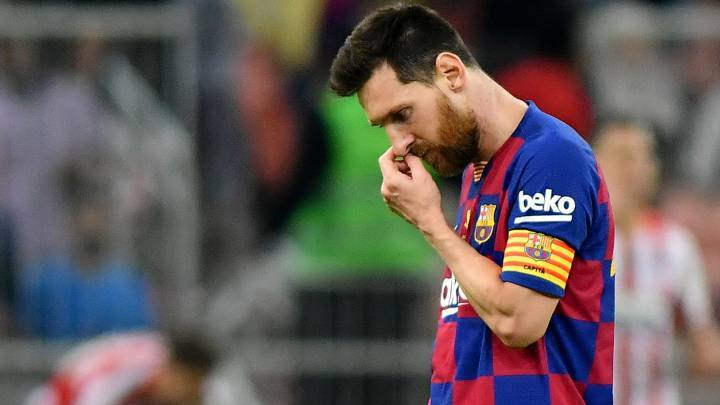 “It’s a shame because we switched off for a few moments and made children’s mistakes,” Messi said to AFP.

“We should have closed out the match. It’s a blow for us, especially as we were the better team. Our mistakes cost us dearly.”

Barcelona had two goals ruled out after VAR spotted tight offsides while Atletico were also denied a clear penalty at 2-2, after the ball clipped the hand of Gerard Pique.

“They had more legs than us and in the end it cost us,” said Griezmann.

“We made mistakes in everything, in passes, I think I missed a pass to Samuel Umiti before they scored and the little things can lose you a match, a league, a Champions League.”

Barcelona coach Ernesto Valverde will be under scrutiny after the defeat, despite fielding a strong side.

“The goal for 2-2 came at a time when we didn’t know how to get a hold of the game,” said Valverde.

“There is always instability when you lose.”

Atletico boss Diego Simeone believes they have what it takes to beat the best team in the world.

“It is important for the club, we beat the best attacking team in the world. You saw our bite, our belief, our desire. It’s what this club is all about.”