The established players in this Wales squad had been saying all week that it is for a new generation to make memories now. That a 28-year-old should have been the one to do so in their opening game says everything about his struggle for recognition in football.

Kieffer Moore was playing part-time for Truro less than 10 years ago, working as a lifeguard and personal trainer to supplement his income.

Even 20 goals this season for Cardiff City seemed to have left Wales’ manager Rob Page unconvinced that he should be the focus of Wales’ attack as their tournament began.

There can be no doubters now. This game was disappearing from Wales — with the Borussia Monchengladbach forward Breel Embolo giving centre backs Joe Rodon and Chris Mepham a desperately torrid time — when Moore arrived to leap and head home an equaliser of great technical merit.

That was by no means the end of the struggle for Wales, who can consider themselves fortunate to have emerged with anything from the game.

Goalkeeper Danny Ward continued the form he showed against France 10 days ago with a save of the highest order to tip away an Embolo header.

Page said last night that it was ‘a positive start’ but it is hard to view this game that way.

It was a pale imitation of what Wales brought to the France championships five years ago, with less ambition and a lot less of the counter-attacking power which was so thrilling back then.

They did not manage to get Gareth Bale into possession — the captain was a marginal figure — and sat so deep for long periods that they invited Swiss pressure and shots on goal.

After a few brief incursions at the start from Manchester United’s Dan James – who was the outstanding attacking threat for Wales, alongside Moore — Wales seemed to have given up the ghost until the equaliser came.

The pre-match ceremony had actually promised far more. In the vast, near-deserted stadium, the Wales players turned to face the small pocket of their fans — 200 or so — to sing the anthem. An excellent touch.

Briefly, there was evidence of what a danger Moore and rapid wide players might bring.

James had given the right-back Fabian Schar a torrid half hour before the defender was booked for barging him to the ground as he threatened to burst away. This was the combination that brought the outstanding save of the first half. Keeper Yann Sommer leapt to glove the ball over the bar after James had stood up a ball that Moore leapt to direct towards the top corner.

He offers a lot more than a 6ft 4in centre forward target but his capacity to generate power out of nowhere with his headers served Wales well.

The attacking duo were so effective it was a mystery Wales did not try to profit more often. Instead, they dropped deeper and deeper, with Joe Allen needed for such constant surveillance of Xherdan Shaqiri that he was unable to create anything worthwhile from midfield.

The game began to belong to Embolo, the Cameroon-born 24-year-old, who twisted inside Wales’ two centre halves and broke through on goal, forcing Ward to palm the ball away. From the ensuing Shaqiri corner — levered into the six-yard box yet again — he headed home because Connor Roberts was not even watching the ball, let alone challenging for it.

The goal helped Wales, drawing some ambition and drive from a side who dared not contemplate an opening defeat in a group which also includes Italy, their last opponents.

Ben Davies struck a half volley from the edge of box. A Ramsey free kick sailed fractionally over Moore’s head. But Embolo continued to terrorise, curling a shot marginally wide, before Moore’s header put Wales back level.

He lost his marker with a diagonal run for a ball Joe Morrell had arced into him, leapt and angled a header which flew beyond Sommer.

The game began to belong to Embolo, the Cameroon-born 24-year-old, who twisted inside Wales’ two centre halves and broke through on goal, forcing Ward to palm the ball away. From the ensuing Shaqiri corner — levered into the six-yard box yet again — he headed home because Connor Roberts was not even watching the ball, let alone challenging for it.

The goal helped Wales, drawing some ambition and drive from a side who dared not contemplate an opening defeat in a group which also includes Italy, their last opponents.

Ben Davies struck a half volley from the edge of box. A Ramsey free kick sailed fractionally over Moore’s head. But Embolo continued to terrorise, curling a shot marginally wide, before Moore’s header put Wales back level.

The goal off a cross from Joe Morrell in the 74th minute hinted that Wales could again be surprise contenders at Euro 2020, like they were five years ago when the team reached the Euro 2016 semifinals. Moore nearly gave Wales a lead with a looping header which Switzerland goalkeeper Yann Sommer stretched to push over the bar, but he was hurt in a clash on the resulting corner. Switzerland dominated possession but wasted numerous chances. 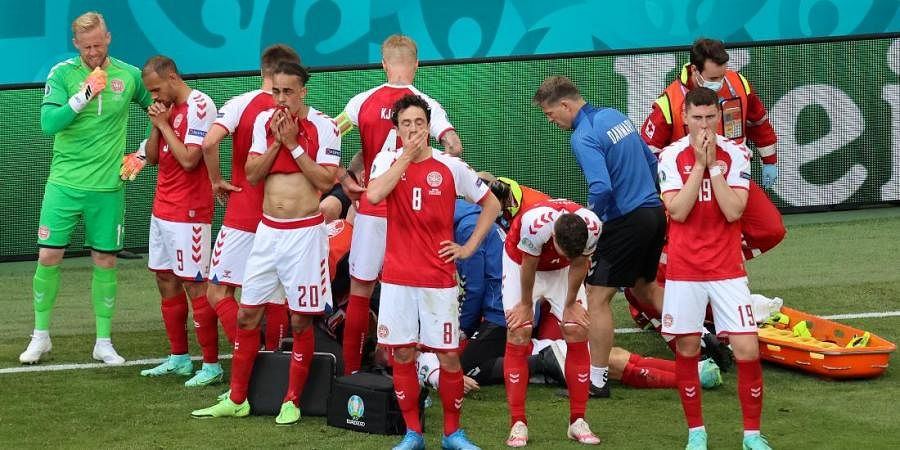 Finland had a debut to remember as they defeated Denmark 1-0 in Copehagen, courtesy of a header from Joel Pohjanpalo. There was a massive delay in the first half after Christian Eriksen collapsed. After receiving lengthy treatment on the pitch, he was taken to a hospital. The match was suspended by UEFA but after Eriksen was declared stable, the game resumed at the request of the players.

Christian Eriksen was recovering in hospital on Saturday night after collapsing on the field during Denmark’s European Championship match against Finland.

Eriksen, the former Tottenham Hotspur midfielder, was given CPR treatment by medical staff before being taken to hospital in Copenhagen. He was said to be awake, with his condition described as stable.

“Christian Eriksen is awake and his condition remains stable. He remains hospitalised at Rigshospitalet for further examinations,” a statement from the Danish Football Association read.

The Group B match, which had kicked off at 5pm, was stopped after 41 minutes. It restarted at 7.30pm, with the Danish Football Union saying Denmark’s players chose to play on after speaking to Eriksen.

Head coach Kasper Hjulmand was in tears after the game, which his side went on to lose 1-0.

Denmark’s decision to carry on, agreed in the changing room after lengthy consultation with coaches and Finland, ensured the fixture was completed but sucked any sign of urgency out of the side.

In any circumstances, Hjulmand’s team would struggle to maintain their creativity without Eriksen.

And Hjulmand struggled to hold back the tears during his post-match press conference and revealed they had the choice of finishing the Group B opener on the night or return on Sunday.

“I could not be more proud of this team, who take good care of each other.

“There are players in there who are completely finished emotionally. Players who on another day could not play this match. They are supporting each other. It was a traumatic experience.”

A draw would have been the best the Danes could have hoped for, and they were granted a generous penalty by Anthony Taylor, which Pierre-Emil Hojbjerg subsequently fluffed. In the end though, both tournament newcomers Finland and Denmark got the result they needed – Eriksen was awake in hospital, and the tournament lives on too.