The day of the undead is fast upon us, but we at Football Tribe have decided who to turn to for safety. That would be none other than Satun United, a club currently languishing in Thailand’s fourth division, infamously known as “The Exorcists” for their reported supernatural abilities.

The side are known for their various superstitions, including refusing to enter the pitch from the half-way line, and instead choosing to march on from the corner flag.

Satun’s wikipedia page reports that the side’s football is “very much alike to Brazilian football style,” but unfortunately even the height of their psychic and mind control abilities “did not make its way to convince [the] media to report in that way.”

However, even if the club’s supernatural abilities don’t work on journalists (thankfully), they have proven to be especially potent against opposition players. The side have regularly done well, finishing on top of the T4 Southern League two times in the last three seasons, but have consistently failed to break the hoodoo in the playoff round.

The Exorcists’ crowning glory was a 1-0 friendly victory over Buriram, showing that even the nation’s strongest clubs are not immune to their tricks and spells. Opposing players have also previously reported feeling nausea and sickness when playing on the hallowed pitch at the Satun Provincial Administrative Organization Stadium, a clear sign that their supernatural abilities make them a force to be reckoned with.

Their football exploits pale in comparison to their primary role, which is protecting the citizens of the Satun province from the supernatural threats that they face. It is proudly reported that, due to their presence, the province is “safe from both ghosts and humans.”

Unfortunately, their psychic powers do not extend into the realm of English spelling, as evidenced by their ‘stunning’ former logo: 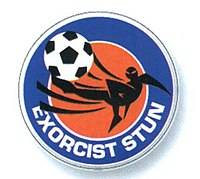